"quid rides? mutato nomine, de te fabula narratur.” ( "Why do you laugh? Change the name, and the story is told of you." )

Fable, is the name of verse stories with a purpose of teaching in the end, as it makes you laugh, and think. Giving a humane personality to entities such as plants, animals or inanimate objects and making them speak is a basic characteristic of fables. Besides, I wish to add that it is a writing type which criticizes a person or a behavior and gives people a lesson this way, by telling a reality which has to be told frankly and effectively in an implicit way.

At the present day, it is possible to allege that a successful artist is a figure who sees the contradictions spreading from past to present, and to future and analyzes these contradictions skillfully and suggesting the society new readings. An artist who works under the context of this definition, will produce artistic knowledge with his/her sayings and productions and will establish his/her interaction with the audience on an aesthetic expression with intellectualism, rather than absolute modernist formalist aesthetics. Thus the produced work will transform itself by the readings of the audience, and transform the audience itself. Now I can tell you the reason why I made such a long opening clause: I want to make some inferences about the “Anti-Hero” series of Ahmet Sarı that he will be exhibiting in Karşı Sanat with a role of the narrator himself where he performed using the modern aesthetic’s language and expression rather than just telling stories. Because, it is a project-exhibition in a manner which hasn’t been seen in a long time as a retroactive exhibiting, it will both show the artist’s figure reaching present from the past and making it in a neatly exhibition.

In this project, Ahmet Sarı will exhibit his different works, performed by using various technics and materials: Big sized canvases, on-paper works (paper based), works he performed using wires, and video. So we will witness a discourse formed with different materials and productions. Primarily, canvas works have a quality functioning with a quality such as a “fable”. For example, images such as imprisoned giraffes and donkey which has lost its front feet probably in a mine attack are seen among the important examples of how the chaotic war influence and the society is placed into templates by political engineering. On the other hand, it can be seen that in a manner which makes us think that there is a reference to the metaphor where a pumpkin on head and three monkeys were used, it can also be seen that a naked monkey-ish king was also used with the rhetoric of “The Emperor Is Naked” – references to Andersen’s tales can be seen continuously, under various forms. Besides, in the work named “The Hen That Laid Golden Eggs”, the figure represented with a pilgrim figure with a long beard and doing hypocrisy, today’s politics which is run over religion trading (a saying in Turkish to describe using Religion for personal or organizational purposes, using it as a material) is ridiculed. In all these works, you will be able to detect how expertized is Ahmet Sarı in the use of paint. On the final stage, we may remind that unlike today’s machine made arts production, he makes it all by himself.

In the artist’s performances where he used wires, it can be seen that pop-images are used in a mocking manner, even in a way that’s close to humor and street language. In these works he uses automotive paint and stainless steel, thus he develops the accessory box of arts. A Sumo wrestler counting prayer beads, ridicules the exhibits where they are put into rings in Turkey with authentic wrestlers for show purposes, and also shows what comes up from such synthesis. The work describing a flexible yoga move, reminds of the prisoners with hoods on their heads. Some characters are materialized as “anti-heroes” in these practices. For example, a woman who had many past marriages but doesn’t have the lower half of her body today, or women who were born with their twins, are put as the subject of art, by being transferred to the visuals from the artist’s perspective. Ultimately, the suicide bomber figure opens the deed’s existence to questioning which can be seen often in Islamic geography.

Finally, the artist’s works on the handmade paper and his video should be considered. Figurative works developed by himself with organic materials, use of coffee and special ink clearly shows the quality of the artist where he is also well-known as a printed arts artist. It is an army of images, consisting of animals, people, plants and commodities. After the works performed by canvases and wires, Anti-Hero series performed on papers, will strike the audience in a shocking way, so to say. These works based on intuition and experiment, are not success or failure, these are works exactly reflecting the criteria of “experiment” spirit and methods. Video practice to take place in the exhibition, is a compilation of visual and audio recordings in a period when he stayed in the nature away from the urban life, in an “artist-in-residence” program. Considering only the voices the nature produced, this time we can say that Ahmet Sarı’s quite “concretist” and materialist side has also emerged.
With this exhibition, we will need to pay attention to a didactical approach and to Ahmet Sarı’s advices. Maybe, an “ethical” return to such values that we lose day by day in life and arts such as frugality, devotion, helpfulness and goodwill. “Anti-Hero” which is a presentation of visual arts, also keeps the oral tradition alive. You will easily keep those images in your memory and recall them when necessary. It should be this approach, which makes Ahmet Sarı a storyteller.

When all the productions of the artist are considered totally as a whole, it is obvious that he has a multi-medial working style. What he lived, the lives he witnessed and his impressions/inferences by developing a criticism of authority, reaches the emergence of Ahmet Sarı’s discourse. In the works produced by using canvases, paper works and wires that we encounter in this exhibition, you will clearly see the concepts such as “power”, “authority”, “reversal of symbols”, signs”, “natural evolution” and “game”. Each image – animals, people, plants, things etc. - opens to a new medium with the artist’s productions, in different forms or genetically modified organisms. In his works where he produced using causticity, humor and irony, we may say that his basic purpose is to transmit his message and to increase the audience’s awareness by turning them into an active recipient. That’s when there can be an Aristothelesian catharsis and the recipients can step into freedom. 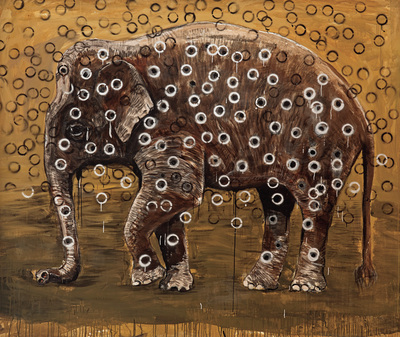